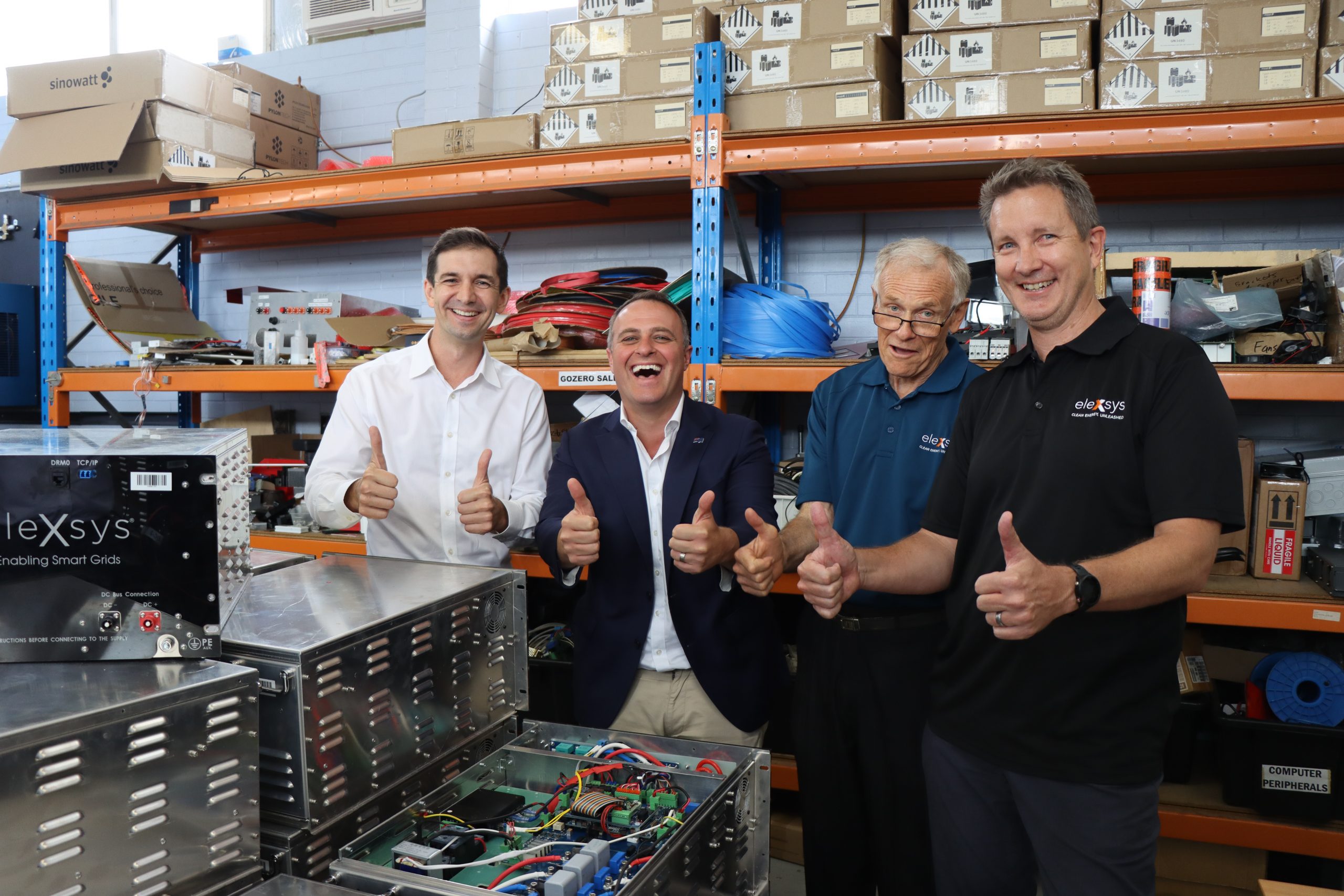 eleXsys Energy will undertake the first residential market demonstration of our innovative clean energy technology thanks to new funding support from the Australian Government.

In a major milestone, the new project will showcase the potential for our world-leading technology to increase the penetration of home rooftop solar and batteries in low voltage areas, reducing the need to build costly distribution grid infrastructure.

On behalf of the Australian Government, the Australian Renewable Energy Agency (ARENA) will provide $450,000 in funding to demonstrate how eleXsys can increase the capacity of low voltage power lines to host locally produced green energy across southeast Queensland.

Mr Wilson was joined by Assistant Minister for Waste Reduction and Environmental Management, Trevor Evans, for a tour of the eleXsys site and an introduction to our technology by our Chief Information Officer Peter Newland.

The ARENA funding is part of a $1.92 million trial to be undertaken in conjunction with local distribution network service provider (DNSP) Energy Queensland.

Energy Queensland will test eleXsys at its Real Time Digital Simulator facility in Cairns to show how it performs across a wider range of network types. The project will also benefit from the insights of several other DNSPs participating in a dedicated stakeholder reference group.

eleXsys Energy will manufacture and install five eleXsys devices, with three being directly connected to Energy Queensland’s network, one being trialled behind the meter at a customer’s home, and the other being used for testing at the Real Time Digital Simulator facility. The findings of the project will be made public through a comprehensive knowledge sharing report.

“While our technology is already in use at Brisbane campus and soon to be commissioned at a major commercial site under the IKEA eleXsys Microgrid in Adelaide, this will be the first demonstration of eleXsys for the residential market,” said eleXsys Energy CEO Dr Bevan Holcombe.

“ARENA’s support and that of Energy Queensland are critical to demonstrating applications of eleXsys in the residential DER market and how existing distribution grids can be supported to host much more exported solar energy than is typically the case in Australia today.

“We express our deep appreciation for the continuing support of eleXsys Energy by the Australian Government and particularly acknowledge and thank Energy Queensland for its participation in this important demonstration.”

“To help increase the amount of distributed energy we can have on Australia’s energy network, it’s vital that ARENA supports these new technologies such as eleXsys, which not only helps to connect more home solar and batteries, but also saves money on not having to install more poles and wires to support increased demand.

“ARENA is excited to be supporting eleXsys Energy’s trial of the eleXsys device. After a successful trial in southeast Queensland, we could see the technology installed across the grid to save costs for users while also continuing Australia’s commitment towards net zero by 2050.” Mr Miller said.